Brexit: how its affecting the Energy Market

As the dust starts to settle on the impact of the ‘Brexit’ vote, we are now starting to see the potential implications of that shock result on the energy market and how it is affecting the Gas and Oil prices. Opinion polls leading towards the referendum showed a clear lead for the remain camp, pushing a notable bookmaker to offer odds of 1/8 that the UK would decide to remain in the European Union on the morning of the vote. It is clear that the result sent shock waves around the world, with $120 trillion wiped off the stock markets on a disastrous Friday trading. The political implications are also being felt, with Prime Minister Mr David Cameron stepping down creating a power struggle to be the next leader of the Conservative Party and the next Prime Minister of the UK, the impact is also being felt on the other side of the House of Commons, with Labour Leader Mr Jeremy Corbyn under pressure to resign from his position. This cocktail of uncertainty coupled with the uncertainty of what a ‘Brexit’ actually means for the UK sent shivers down the spine of Stocks in the immediate aftermath, with banking stocks such as Barclays Plc and Lloyds Banking Group Plc taking a battering. Before the referendum, we did flag up the impact a leave vote would have on the British Pound and we were not wrong, with the Sterling plummeting to its lowest value against the US Dollar in thirty years – and as such sending gas prices up sharply resulting in many Price Matrices being pulled.

It is fair to say that once the markets digested the news of the vote and had time to act rationally, markets recovered will enough to claw back the losses of the previous days. The world waited in anticipation to the words of Mr Martin Carney Governor of the Bank of England on Thursday, the markets had little or nothing to go on from politicians, so to say that Martin Carneys speech was an important one is an understatement. His words gave a clear sign of a resurgence in expansionary monetary policy, hinting at a cut in interest rates in the summer and a rollout of Quantitative Easing. Markets rebounded whilst he was making his speech, as essentially they are trading with cheaper money. However, as with most economic decisions there is another side of the coin, the impact of expansionary monetary policy has on the British Pound cannot be underestimated, with Quantitative Easing, the more money that is printed the more that money becomes devalued. And since June 23rd, the British Pound has lost significant ground against the US Dollar and the Euro, which can be seen on the below graph: 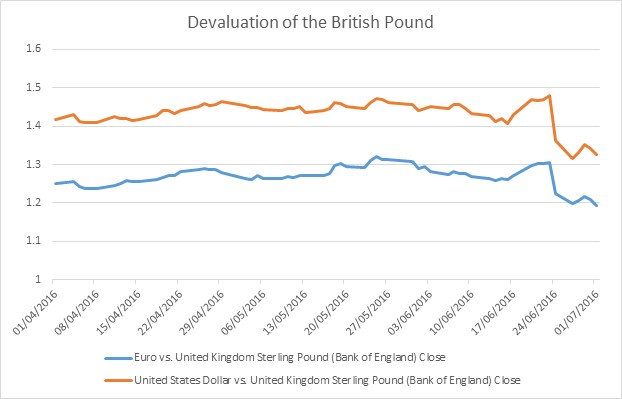 This has a significant impact on UK Gas Prices, due to a fall in the British Pound, imports from the continent increase whereas exports to the continent become cheaper. As we import a significant amount from the continent our Gas prices therefore increase, due to the sharpness of the devaluation of the Pound suppliers have been pulling their prices as the market has little time to keep pace with the volatility. In truth, gas and electricity prices have been rising for some time, as it is directly linked to Oil Prices – recently the Saudi Energy Minister and the Secretary General of OPEC announced that the global market was heading towards a balance triggering a boost for commodity that has risen by 80% since its low point in February. We can see on the below graphs, how both the Gas and Oil Prices have evolved since April: 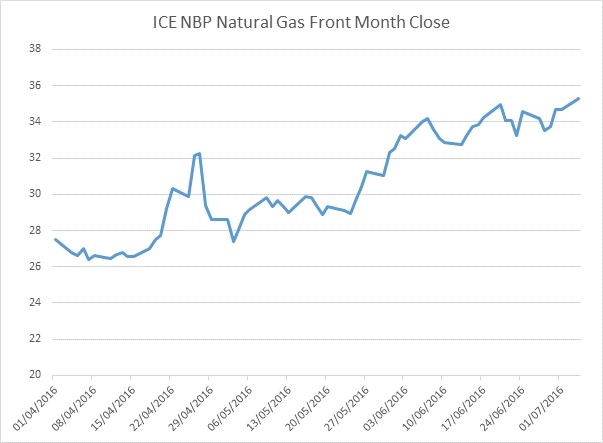 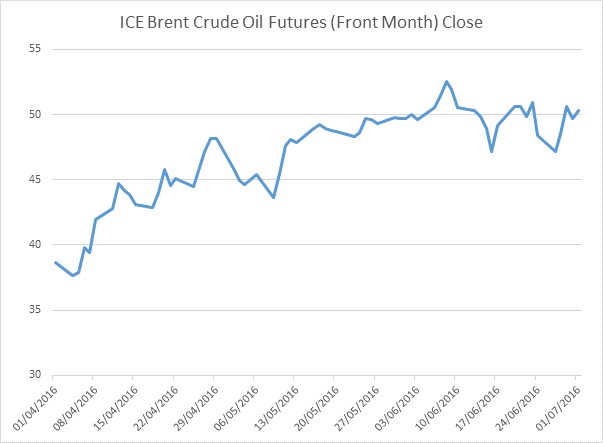 At this point it is hard to envisage what is going to happen next with so much uncertainty within the Political sphere, with the key next step being finding a new Prime Minister who can lead the UK through these uncertain times. The biggest hurdle that may need to be negotiated is the state of the UK Economy and the battle to avoid a recession, Chancellor Mr George Osbourne looking to cut the UK Corporation Tax to 15% by 2019 to attract more overseas investment is the first move from a man that we haven’t heard too much from over the last few weeks, however the key factor of his Economic Strategy since he became Chancellor seems to be over, with the announcement that the 2020 Budget Surplus plan under threat. The next few weeks and months will prove to be incredibly unpredictable, it remains to be seen if Gas and Electricity prices will continue to rises further but it may prove better to expect increases in the short term.